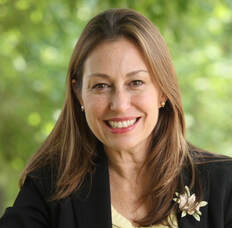 Alex Arriaga is Senior Strategy Advisor for the Children's Policy and Funding Initiative at Tides Center and is Founder and Partner at Strategy for Humanity.  Alex has served in leadership positions at the White House, the U.S. Department of State, in the U.S. Congress, at major non-profit organizations, and now in the private sector. She has more than 30 years experience working at the global and national level crafting policies, bridging communities, and achieving priorities to advance human rights. At the state and local level, she is known for working to enable education for all.

Alex launched Strategy for Humanity as a consulting firm that works with mission-driven organizations and those who fund them to develop effective strategies, conduct smart advocacy and analysis, and achieve meaningful results. The firm embraces diversity as an asset for success and the leadership team is woman, minority, LGBTQ, and person with disabilities – led.  Grounded in the belief that how you do business is as important as what you achieve, the firm creates conditions that enable individuals to fulfill their potential and sectors to bridge their differences in order to craft and advance a common agenda on critical issues. At Strategy for Humanity, Arriaga leads a team of highly experienced leaders with deep expertise, creative problem-solving, and effective leadership.

Previously, Alex was active in the public and non-profit sectors.  During her tenure leading government relations, policy and advocacy for Amnesty International USA, The Hill recognized AIUSA as a top human rights lobby in Washington, and Arriaga was featured in A Pragmatic Idealist Pursues Justice for All (The Washington Post). At the White House, Arriaga was appointed as Special Assistant to President and chief of staff to the President’s Special Envoy for the Americas. There she influenced U.S. policy towards countries throughout Latin America. Arriaga previously served as senior adviser in the Bureau of Democracy, Human Rights and Labor at the U.S. Department of State where she was U.S. Delegate to the United Nations Commission on Human Rights (twice), a member of the Department’s Bosnia Task Force, and Executive Director of the Secretary of State’s Advisory Committee on Religious Freedom Abroad. Arriaga began her career in the U.S. House of Representatives as director of the bipartisan Congressional Human Rights Caucus where she increased participation to involve a majority of the U.S. Congress (across party lines) and focused on over 100 countries and myriad issues.

At the local level, Arriaga is active on education issues. In recognition of her strategic and impactful thought leadership, Governor Ralph Northam appointed Arriaga to serve on the State Council of Higher Education for Virginia (SCHEV). The Arlington School Board recognized Arriaga as an Honored Citizen for her extraordinary and multi-year contributions to improve the education experience for students with disabilities. Arriaga’s work was showcased in More Autism Training for Teachers (The Washington Post). She also engaged in a national task force to address college sexual assault and create a model approach to pilot across the country.

Arriaga has written numerous published articles and reports, is a bilingual spokesperson in English and Spanish, and serves on a variety of nonprofit Boards. She is the recipient of many awards for her leadership and service, and she currently serves as Vice Chair of The Jefferson Trust, Co-Chair of the Women's Refugee Commission, and Vice Chair of the SCHEV Academic and Programs Committee.  Arriaga is first generation American of Spanish and Chilean descent.